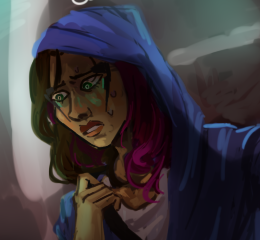 never have any idea what to write in these things, I'm in my early 30's and a trans girl. please don't follow unless you have a bio or some publicaly avaible toots so I can be sure your not a complete ass

My name is cindy, I'm a Pre-HRT, trans girl, I'm ace and I tend to toot in boosts with pretty long strings between when I'm active.

I'm a gamer, some of my favorite games are #undertale #xcom #civilization and #persona (though my first was 4 and I haven't played the earlier entries to the series)

very few people know anything about idaho it may not exist https://www.youtube.com/watch?v=cGqEBvlmFAQ

god I wish that was true

"tali zorah vas normandy does this unit have a soul"

remembering mass effect and having the feels again. the ending they went with was trash but moments like talking to vigil in the first game or legion asking "does this unit have a soul" will always hit me in the feels

you know whats nice, that now has a 30 year old adult my parents are telling me I shouldn't let my brother's opinions decide my life. but as an impressinable kid making choices that would effect me for decades they would just let him belittle my interests all day.

ok so for a pirate themed DND game I'm planing I figured the outline shoul be, 1. find map 2. find cipher to dycrypte map. 3. follow map this part will largely be on land, but the earilier parts won't else it won't feel pirate themed

ok so I just opened masto so I'm sure I missed something but VPN's seem to be a topic of conversation today.

I'd just like to point out that their claim to keep your data secure is far overblown, even over public wi-fi. as the site, you're talking to is using similar encryption (unless it's really out of date or the web designer should be fired).

it's ability to unlock content from sites like Netflix and youtube is likely temporary as those sites are working hard on finding ways to detect VPN's.

and it doesn't protect your location if you're on a phone with a gps.

tom Scott made a great video about VPN's including the times they can be useful. https://youtu.be/WVDQEoe6ZWY

Hey does anyone have a written refund policy for commissions I can get some ideas from for going forward? Or tips?

why would the scammer call me twice, in less then half an hour, with the exact same automated messeage

I think that was one of my better interviews, should hear back by friday

why does have of all sci-fi eventually copy the giant worms from dune?

warrior nun is a weird show, but it's not weird in the way I thought it would be

clearing my internet history, or "logging into every website again"

if at first, you don't succeed then you're probably not seto freaking Kaiba

never have any idea what to write in these things, I'm in my early 30's and a trans girl. please don't follow unless you have a bio or some publicaly avaible toots so I can be sure your not a complete ass

gamer There is nothing here!