GMed my first session of the #PathfinderPlaytest. #FantasyGrounds is an absolute horrid mess of a UX and most of the session was spent trying to explain to my players how to do everything. Even on my end, there's completely nonsensical issues. I can't, for example, drag a player's icon to the map to put their token on the map - I have to first drag them to the combat tracker, and then drag them from there to the map. Just… why? (1/8)

In case anyone playing #PathfinderPlaytest hasn't seen this yet, GustavoMalek on Reddit has been releasing updated PDF's of the rulebook, with all the changes added in and with all the references to page numbers linking directly to that page. It's great! https://www.reddit.com/r/Pathfinder2e/comments/9etyxz/pathfinder_2e_playtest_rulebook_updated/

I'm really liking the #PathfinderPlaytest and it fixes a nagging problem I've had with #ttrpg's for a while now: stat allocation.

In most #DnD or #Pathfinder-esque games, you roll for stats. Most folk who insist on rolling say it gives charcters, well, character. For older editions, that's true, stats aren't critical in classic D&D. But in newer editions, stats determine both how often and how well you succeed, and rolling high or low during chargen can impact months or years of play. (cont)

for added context this same server's mod team keeps being bullied by everyone for not banning islamophobes and homophobes. pure, unadulterated gamer victimhood. it's fucking hilarious

my favorite editorial by famed leftist nathan j. robinson, a seminal piece that owns the libs

I come back and mastodon is still doing the thing where, if you've got exactly six columns by default in fullscreen, it *just barely* requires horizontal scrolling, and it's infuriating.

I had a CSS tweak to fix it but I don't know where I put it.

Tokodon, which is just sitting in the AUR and compiles from a very work-in-progress KDE gitlab page, is pretty neat though. It's meant for Plasma mobile, but all those Plasma mobile apps also play really nice with desktop tiliing scripts like Krohnkite since they display their contents correctly even in a tiny window. It apparently isn't yet at a point where it can correctly toot, but I'm pretty excited to see where all these apps go.

Whatever you think of the subreddit, the discord has a dedicated neurodivergent channel and it's been pretty fucking great getting confirmation of a lot of hte things i've posted being acftually real.

Iunno if it's something that came out of chan sites identifying as autism, jokingly or otherwise, but seeing that overlap between so-called feminists shitting on poverty and autism and outright TERFs kind of woke me up.

Someone recommended I read some PDF, Anarcho-Autism (https://detroitleprechaun.files.wordpress.com/2018/08/anarcho-autism-by-detroit-leprechaun2.pdf). I haven't really seen much in terms of lefty autistic writing, so it's kind of comforting to know there's other poeple getting tired of being thrown under the bus.

Obviously, I'm not really going to be leaping to the defense of antifeminists, but it seems kinda like a regular pattern in lefty spaces where autism's kinda treated as an acceptable target. Usually not explicitly, but anything that's associated with autism (taking "too much" interest in something like a game, the ree meme, the "manchild" stereotype) seems to get a pass.

And that shit leads to a lot of self-loathing.

I've been growing a lot more depressed lately with liberal feminism, and specifically the seemingly common use of autistic traits as a way to insult chuds.

The recent controversy over some apparently notable birdsite user complaining about the entitlement of broke men kinda brought these feelings back up. It reminds me a lot of how some TERF spaces have been talking about "low value men" and how it seems fairly obvious they're talking about autism and poverty.

@Helmic @dankwraith endgame is a fake idea designed to prevent you from moving on to new games, so that's a good thing in my book 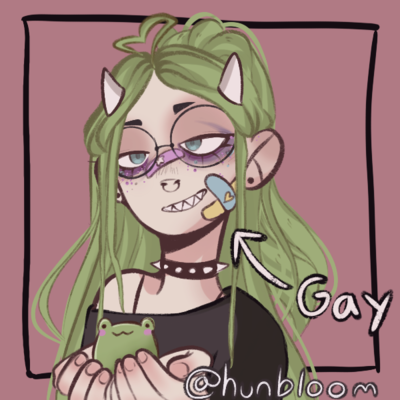 sitting here, breaking into a cold sweat. i've moved into a new apartment, my PC setup on the floor while I await furniture.

my dog has stepped on my mouse, boosting a random ass post. i am paralyzed, unable to unboost for fear of my misfortune being misinterpreted as the fediverse's cruelest "syke."

oh fuck i made this before hbomb's vid went up, that's a bit weird. that is exactly what i was talking about, platforms don't permit proper collabs and the only good creative platform is newgrounds. stop uploading to youtube, the internet needs to go back on newgrounds RIGHT NOW or else th

I think Newgrounds was one of the few places where it was actually a regular occurance for people to seek each other out for collabs, with a lot more equal sharing of credit. That still happens on other platforms, but it's usually only when the main channel wants to someone to do a cameo or help out in a small way. There's not the same sharing of authorship (and presumably little to no sharing of revenue), the smaller creator is essentially just doing it to be exposed to the larger's audience.

You know what Newgrounds did that was really awesome, and that pretty much no other platform does? Collab games/movies, where all the contributors are given equal credit. The project shows up on everyone's profiles, and the interface doesn't necessarily point to any one person as the de facto "creator."

AFAIK on YouTube, Soundcloud, DeviantArt, and other creative platforms, everything only ever belongs to a single account. If there's a collab, it's just on one person's channel.

On the last day

When the world has had enough of us

And like a wild horse, decides to shake us free

I will take up my ancestral blade